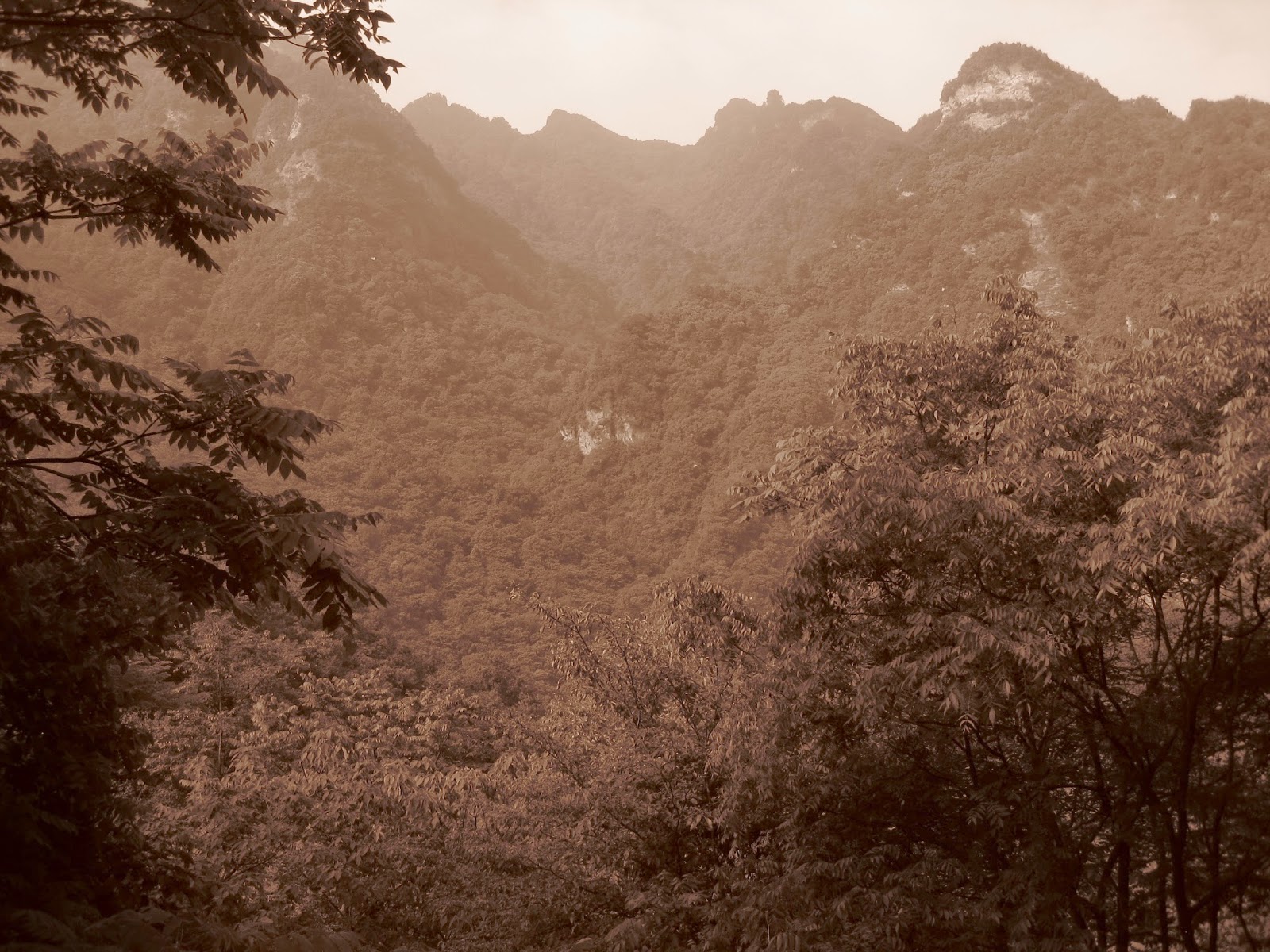 History and Hollywood created an image in my mind of a Martial Artist as an ultimate “badass:” untouchable and able to perform incredible feats. On Wudang Mountain, I learned “Martial Arts” is created with two Chinese Characters: “Stop” and “Weaponry.” We are all familiar with the quintessential “Bruce Lee’s fists of fury,” but martial arts is also deeply practiced for internal mastery; thus leading to spiritual growth and health preservation. The practice of internal martial has been creeping into the Western minds (right behind yoga) for many years now. One of the most familiar styles of internal martial arts is Taiji (or Tai Chi).


When living in the Caribbean in 2010, I was introduced to Taiji. During these months, my Kundalini yoga and meditation practice was strong. I found that the Taiji and yoga worked in complete harmony together: a true balance of Yin and Yang. I was able to root deep into the earth, clear my mind, and move my body with the fluid movement of Taiji, allowing me to soar higher in the clouds through pranayama and kriya. When I left the Caribbean and Emily (my Taiji teacher), I stopped the practice of internal martial arts. In these past few years, I spent the majority of my days living in a tent, tarp, or under the stars. Two of these spring/summers were spent in Alaska working with “at-risk” youth who really benefit from an internal discipline.  Many damp, cool mornings made it difficult to drop to the earth for a Yoga/meditation practice. During these times, I wished my knowledge and experience with martial arts was deeper so I could share it with these children. So, I came to China.
Wudang Mountain is the birthplace of Taiji Quan (he ultimate fist), as we know it. Many years ago, a hermit and a sage, Zhang Sanfeng, observed the battle between a snake and a white crane. The crane swooped down to snatch its prey, but the snake elusively moved its whole body like water, always dodging the deadly grasp of the large bird. The battle was beautiful and graceful. The snake was victorious. From this battle, birthed Wudang Taiji Quan.


The sages on the mountain, or “immortals,” spent their days living in the flow of nature, or in harmony with “Tao.” They observed animals, and mimicked them. For example, the turtles breathe incredibly slow and are able to hold their breath for lengthy periods of times; as a result, they live incredibly long lives. Therefore, if humans slow our breath, we preserve our health. In Taiji we mimic the serpent when we move out whole body as one, from the tips of our toes to our fingertips. Float like a Cloud, Flow like Water: Taiji.
I bee-lined it for Wudang Mountain after landing in China. I thought I did pretty good “research” before coming here, as I compared many martial arts schools online. As it turns out, many of these schools are in the “Wudang Mountain Range” but not on “Taiji Mountain.” I received an invitation letter from a school to help me obtain my visa, and felt obligated to begin my journey there. 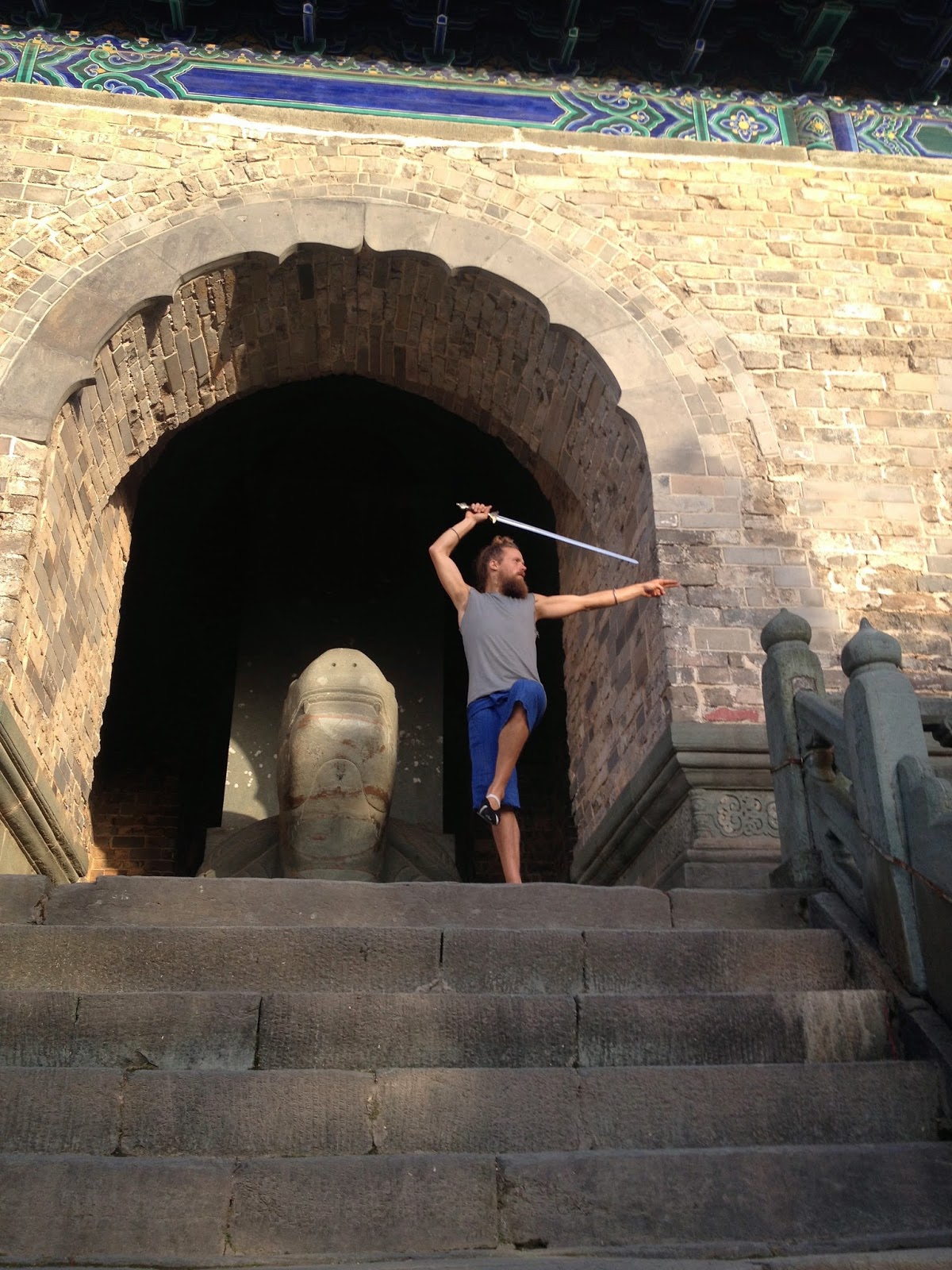 I arrived at 5:20 am, found my room and fell asleep after a long travel from Thailand. In my dream, and old sage brought me to a snow capped mountain. I woke up with a gasp and knew I needed to get to the mountain. I walked to the training grounds and did not see the mountain anywhere. My heart told me I was in the wrong space. During my two days training at this school, I met many wonderful beings that were devoted to learning martial arts and developing a peaceful mind. The training was intense and seemed focused on external martial arts. After speaking with my fellow students, my feelings were confirmed. With a bow of respect and gratitude, I packed my bags and headed to the mystical mountain of my dreams.
Happy as a clam on the bus, I watched as we passed right by the mountain. After an extra long detour, I made it to the foot of the mountain and began my ascent. I studied the map a bit and recognized a cluster of hotels on the South cliff face of the mountain. At this point, I gave up my search for a martial arts school. I was happy being on the mountain. Here I could explore the woods, observe nature, and truly absorb the Tao. Then I met Master Gu.


I walked off the bus and immediately was approached by a man asking me to stay at his hotel. I thought, “Why not check it out?” I enjoyed the simple hotel, but the smell of cigarettes was too much for me. I thought about sleeping in my hammock, and made a gesture that I was going to leave. The man phoned his sister and put her on the phone with me. I tried to explain respectfully that I was going to check out my other options, but she did not understand men; so I said, “I am interested in learning Taiji, so I will look for a school.” I thanked the man, and began to walk out of the hotel, but his little son began to follow me and beckon me back to the hotel. I walked down a flight of stairs to a public bathroom, trying to ditch the little boy and his father who seemed determined to have me stay at the hotel. They were waiting for me at the top of the stairs. 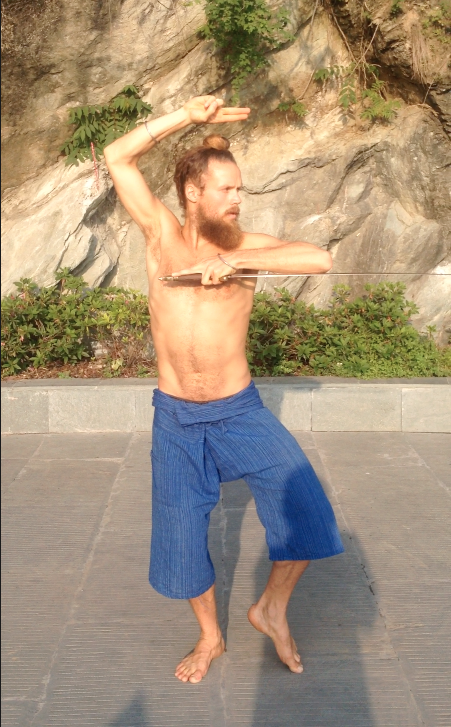 The man looked at me excitedly and handed me the phone again. I heard the calm voice of a man speaking wonderful English, “Can I help you?” I was exhausted and feeling a bit bothered, so I laughed and said, “No, I think this man just wants me to rent a room in his hotel, but I am looking for a Taiji teacher.” He replied, “Perfect! I am a Taiji Master, and I am about 1 minute walk from you. Stay where you are, I will see you soon.”
A graceful Chinese man dressed fully in white approached me and stuck his hand out. “Come, join me for lunch.” I was baffled. I looked at the little boy and his father, and did my best to show them my gratitude. I sat with Master Gu and a group of his students at a small restaurant, toasted a small glass of wine, and officially began my journey into Wudang Taiji.


Master Gu brought me back to his office and we discussed his outlook on Taiji and training, as well as different living situations. It was clear to me that this experience would be unique, as he speaks perfect English, plays flute/guitar, and skips through the streets with happiness showing on his face. My options were: either stay in a hotel-like room, or a cabin in the middle of the woods. I was elated to hear I could stay outside of town in a remote area. As it turns out, Master Gu has access to one of the best spots on the mountain (in my opinion – and I did my fare share of exploring). It is a 4-bedroom cabin with a small kitchen and a bathroom (with hot water for shower!). It takes about 15 minutes on a path from town to get to, so there is barely any foot traffic, and you cannot hear cars. At night, stars illuminate the sky and in the morning, the birds sing in a mirage of sound and thousands of butterflies swarm. I spent many evenings and mornings next to a candle and incense listening to the sweet sounds of nature envelope my being.
Our training ground is “the mountain,” as Master Gu explained. Our usual space was a terrace overlooking the South cliff palace and many sacred sites. When it was too hot, we made our way to the Lao Tzu (father of Taoism) temple to practice. If it rained, we met in the third floor of his office where we had access to a large room with a mirror and windows to the forest.  On rare occasion, we took mini field trips to sacred sites where Master Gu would indulge us in a Kung Fu story and we would begin practice. 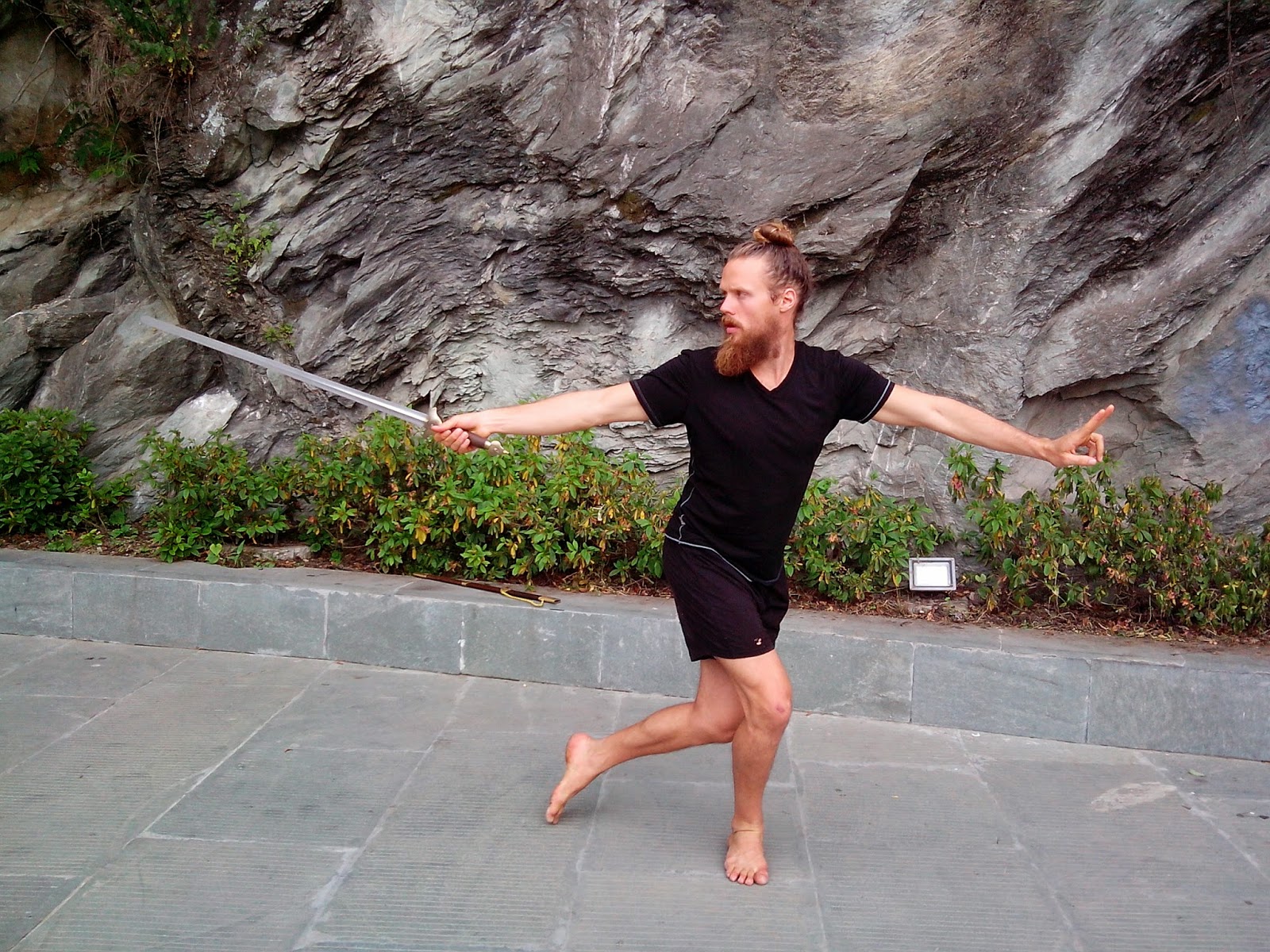 At first, I did not enjoy the attention from the Chinese tourists. Handfuls would show up at our intimate practice of a few students, and began taking photos. Sometimes photographers would get only a few feet from your practice space. I found it invasive and hard to concentrate in the beginning. Eventually, I realized the tourists were receiving a great deal of happiness from watching us, and I witnessed a few people become inspired to begin studying martial arts themselves. Once I was able to get over the attention, I let go completely. Within a few days, I found myself dancing to internal music, doing handstands, sinking into yoga postures, and laughing with the sounds of the mountain.
Practice began with a one-hour session at 6:30 AM. This time consists of gentle “waking up” stretches and massaging for health preservation. After about 10 days, I knew the routine pretty well and preferred to stay in the forest with birds and butterflies. Master Gu understood, but emphasized that I must do “something” before breakfast. We usually ate at around 8 AM: family style. Our wonderful cook would prepare a selection of traditional Chinese dishes for us. We sit around the round table with our chopsticks and our bowl, usually filled with rice or noodles. If you want something, you grab a bite of it with your chopsticks and eat it. There is rarely a time where you serve yourself an entire portion. I grew to love this style of eating and will miss the moments when our Taiji family feasted together (and wow, did we eat good!).
From 9-11 AM we practice again, noon is lunch, then rest period, and 4-6 PM practice, and then dinner. The schedule flows pretty well, and days pass like the gentle breeze.  After review of basic Taiji and an introductory of a basic form, Master Gu said he would teach me the sword since I showed interest in it while he would practice. The sword always finds me! 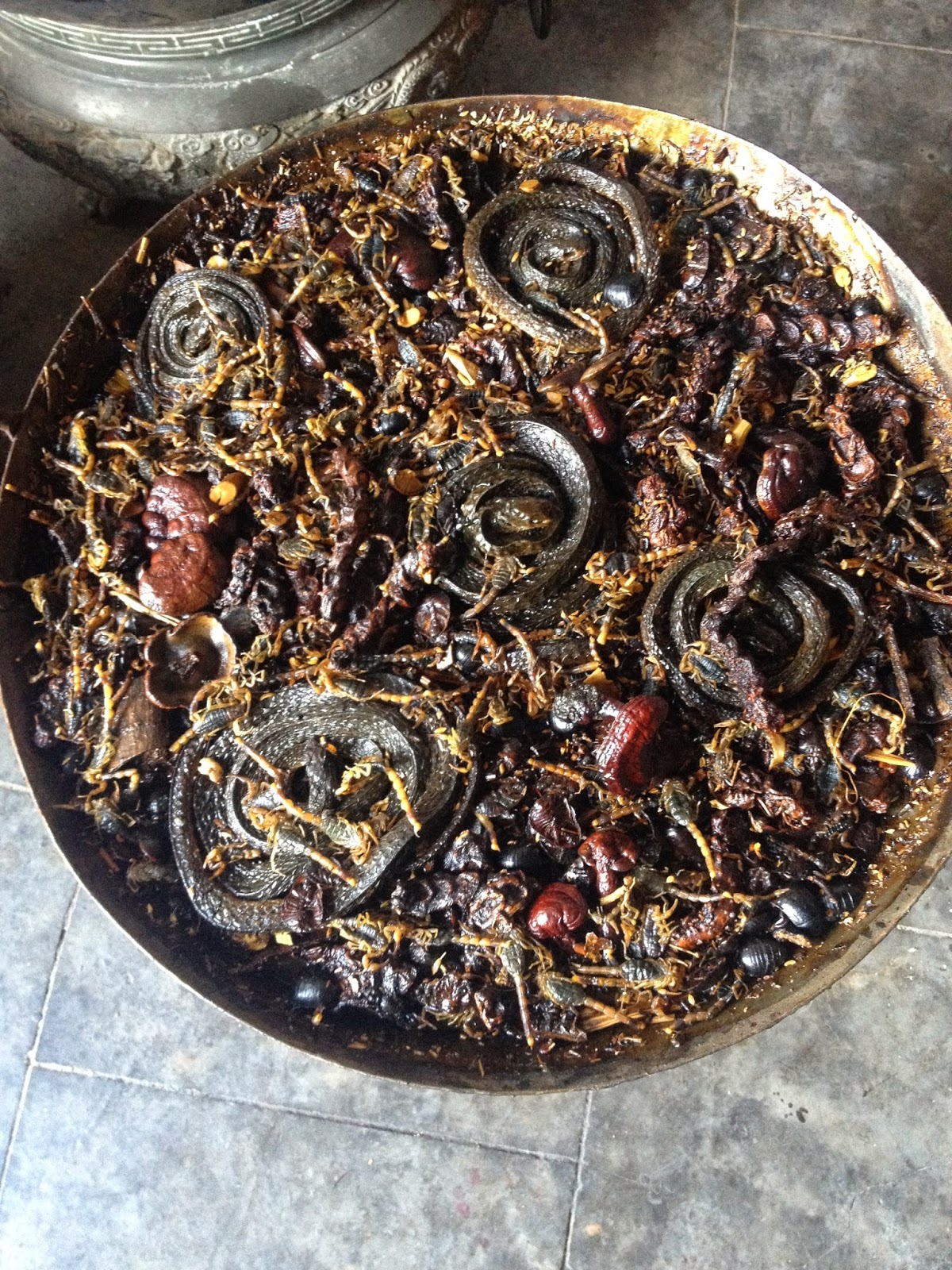 While resting in between my intense training with the sword and opening my hips, I read about Taoist history and internal alchemy practices. I learned that swords have been used by Taoist and Tibetan priests to clear energy in ceremony and free people of their karmic bonds. Either a physical sword was used, or a sword mudra. As the mantra Jai Te Gang says, the sword becomes an extension of one’s arm. When you are completely in touch with your chi, or prana, then your energetic field moves the sword, rather than your muscle. As I dance with the sword under the moonlight, I envision I am freeing heavy karma and releasing density from this planet, allowing her to flower with love.

In between training sessions or days off, I was able to explore the mountain and the magic that is everywhere; seeing palaces constructed in the cliffs and medicine men making potions using scorpions, snakes, and powerful mushrooms. The simple streets are lined with local shops that are overflowing with medicines, mushrooms, honey, teas, and other elixirs that are collected on the mountain. I found myself experimenting with my own brews. Wudang is truly a playground for the internal and external alchemist. The mountains are filled with mysticism and history; it is a mountain worth connecting with if you are a seeking an experience of ancient Taiji or Taoism.

If you wish to see the form, I posted a video, Taiji Sword, of my last night on Wudang with the sword 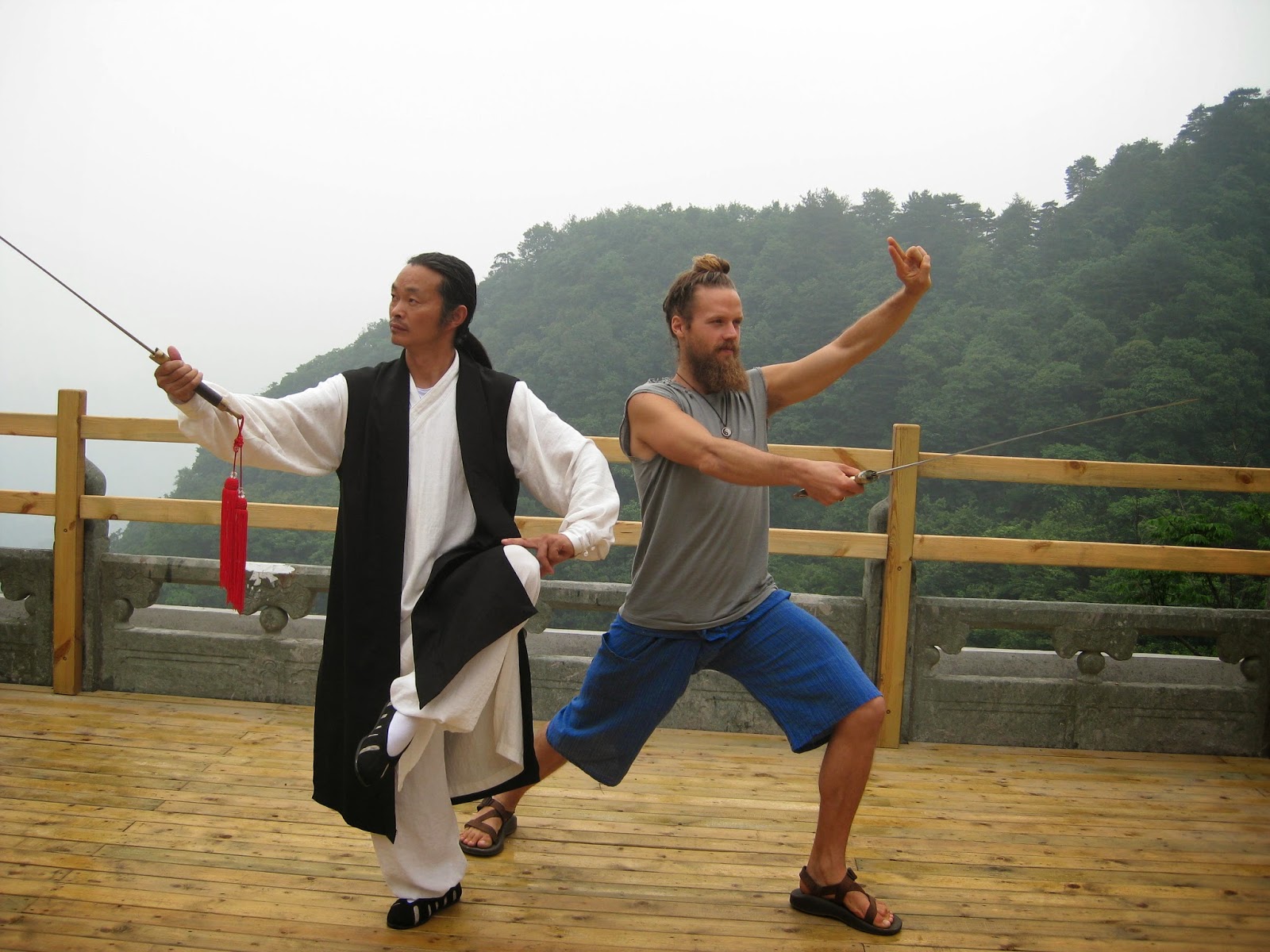 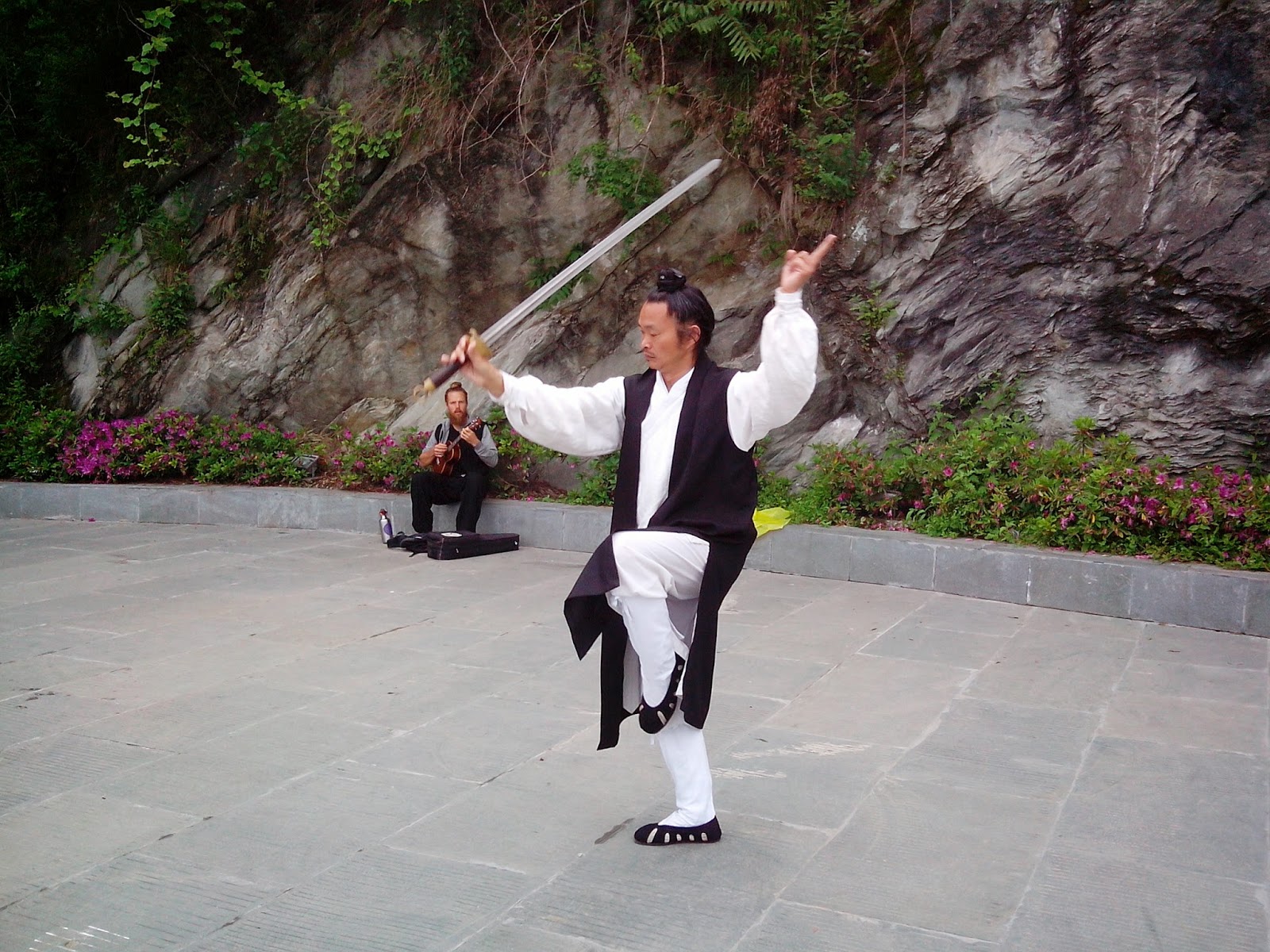 Posted by Unknown at 7:52 AM No comments: